Nanaboozhoo (Greetings in the name of Ojibwe First Teacher)! Dr. Hopi miinawaa (again)! As Oshkaabewis (Ceremonial Helper, Messenger, and Firekeeper) to my Auntie Jacque Lavallee, I often get asked about our most Sacred Medicine, Asemaa. In my experience Asemaa (Sacred Tobacco) Teachings are given through the Oral Tradition and are not written down. Hearing the stories in person with an Elder or other gifted Storyteller around a Sacred Fire is a much more wholistic experience that makes connections not only to your Mind, but also to your Body and Soul/Spirit. In fact, throughout all of the Teachings I have been given, I have never been able to write anything down! If you have ever met my Auntie, you will probably know that she is ‘a professor of the Oral Tradition’. Through her guidance I have learned that I can only remember (i.e. carry with me) what I am meant to remember. So, after many years of hearing her Asemaa (Sacred Tobacco) Teachings, I am still learning the significance of walking that old-time way of Asemaa Nitam (Sacred Tobacco First).

My intent in this context however is to share my perspective on Traditional Tobacco Protocol. While I have heard some people take issue with the word ‘protocol’, when I look it up in the English dictionary it is described as “the system of rules and acceptable behaviour used at official ceremonies and occasions“. From my Ojibwe Teachings, Ceremony can only begin when Asemaa (Sacred Tobacco) is present and all of life is a Ceremony. Even on a most basic level, we can’t even breathe without Mother Earth and all her Plant Nations! For me, I understand this most Sacred Medicine to be a Medicine of Kindness. It connects back to an Anishinaabe Creation Story where Gizhe Manidoo (Great Kind Mystery) taught that first Anishinaabe to give Asemaa as reciprocation for the gifts that of all those ‘other-than-human’ nations gave so that we could live a Good Life as Human Beings. Some people even say that Anishinaabe means ‘Good Being’. So, the way I was taught as an Anishinaabe Inini (Good Being Man) was to first give Asemaa (Sacred Tobacco) before taking anything from the Creation. For example, in the above photo, I am offering my Asemaa (tobacco) before taking any medicine from that Giishkaandag (Cedar Tree). This act of ‘giving’ before ‘receiving’ is hugely significant particularly when we live in a consumer culture that is literally destroying our Mother Earth. Further, this act of reciprocity brings us into harmony with the Sacred Circle of Life because our lives as human beings are only possible because of the giving-ness of every other aspect of the Creation that came before us! Offering Asemaa (Sacred Tobacco) acknowledges these sacred relationships.

While this offering can of course be done with just medicine, I also learned that this Sacred Medicine can be wrapped in beautiful 100% cotton cloth. My Auntie Jacque shares a big story about this first ‘loss of culture’ that happened when an Anishinaabe Inini (Good Being Man) traded all his furs to a Frenchman for that beautiful cotton cloth, but that story is too big to share here. Suffice it to say that that Anishinaabe was only thinking of making a kind gift for his new wife and it was because of that Kindness that that Sacred Cloth came to be used to wrap our most Sacred Medicine.

On a more practical level, when we give Asemaa (Sacred Tobacco) wrapped in 100% cotton cloth to an Elder or Knowledge Keeper, it allows the receiver freedom to either put it on the Sacred Fire or Water, or to carry it with them while they consider how to respond to your request. The natural properties of 100% Cotton mean that it will burn cleanly in the Sacred Fire and will naturally decompose in the Water unlike polyester or the various other petroleum-based fabrics. While any cotton fabric will do, I was taught to choose pretty fabrics that catch my eye or connect with colours that mean something special to me. Although there is a specific teaching about how to make a ‘Tobacco Tie’ that is too big for this context, I often get asked, ‘How much tobacco should I use?’. The answer I have heard is enough to fill a Sacred Pipe (below).

Before Asemaa (Sacred Tobacco) was stolen from Indigenous peoples and brought back to Europe to be turned into cigarettes, there would only be one Pipe Carrier in a village who would sacrifice their physical bodies by bringing that Sacred Smoke to their mouths. In other words, unless you are a Pipe Carrier, Asemaa (Sacred Tobacco) is not for smoking.

Once that Asemaa (Sacred Tobacco) is bundled up and tied with a beautiful ribbon like a present, I was taught to offer it with my left hand or my ‘giving hand’ closest to my Heart. Before a Traditional Person will accept that Asemaa (Sacred Tobacco), they will usually ask you to speak about yourself, your intentions, and your request. This gives them the freedom to refuse your offering if they cannot help you. This connects that medicine with your words, and also allows the recipient, the ‘right of refusal’ if they cannot answer your request. While a single ‘Tobacco Tie’ is usually sufficient for asking a question, a larger ‘ask’ such as engaging an Elder for an Opening/Closing Ceremony, or asking them to be your Traditional Teacher or Advisor on a larger project requires a full package of Asemaa (Sacred Tobacco) wrapped in a full metre of 100% cotton cloth.

The next question I often get asked is where to find Asemaa (Sacred Tobacco). Although different people have different teachings, I was taught that any loose Tobacco is okay which means that you can purchase it any store that sells cigarettes. While I am not a Pipe Carrier, I have been told by those that are that there is a preference for Drum Bright Blue:

I have also been taught to grow my own. Not surprisingly, I have had the most success with Hopi Tobacco that some people call Nicotania Rustica.

Turtle Lodge Trading Post has access to local, natural Asemaa (Sacred Tobacco) for ‘Ceremonial purposes only’ that can be ordered by mail. I really like how they ask people to write a letter of intent explaining why they are purchasing this Sacred Medicine.

It is also really important to remember that not everyone follows Asemaa Nitam (Sacred Tobaco First) like my Auntie Jacque and I. There are often different ways with different Elders/Teachers from different Nations. However, it is very common amongst many (if not all) Indigenous Nations around the world to have some form of protocol that begins a relationship with reciprocity and respect. The best way to begin is always to ask! 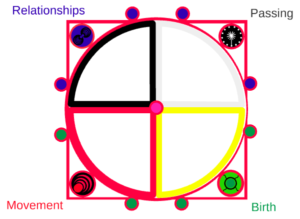